A vast poem written in the Provençal language, Mirèio called to music. In the spring of 1863, Frédéric Mistral urged Gounod to stay in Les Baux, La Crau, Saintes-Maries-de-la-Mer in order to understand the context of the upset love between the daughter of the wealthy Ramon and Vincent, the humble basket-maker. So as to make Mireille sing convincingly the happiness of the herdsmen, Gounod found accents of an almost Virgilian simplicity of tone and freshness: the melody progresses by returning to itself with a regular syncopated pulse, momentum and emotion. There is great melancholy in this C major, borrowing from the minor for "Toujours libre! le coeur léger". Regardless of realism, the buzzing of the cicadas is suggested, on the off-beat, by an oboe and a flute in octaves doubled by the pizzicati and the triangle. The duet offers two sections of almost serene lyrical fervour. Thus we first see Mireille upset, leaving the paternal farmhouse to join a wounded Vincent, then Vincenette (his sister) who reassures her by imitating her melody. Mireille then evokes the feast of Saintes-Maries and the little treasure she will offer them. This transition, touchingly simple, is the heart of this duet; every detail takes its full value and the oboe entry on "jewels" is pure poetry. The prayer ("Ô patronnes des amoureux") where the voices sometimes exchange and sometimes overlap, requires a rare and warm candour, a complicity: their (different) love for Vincent brings them together. 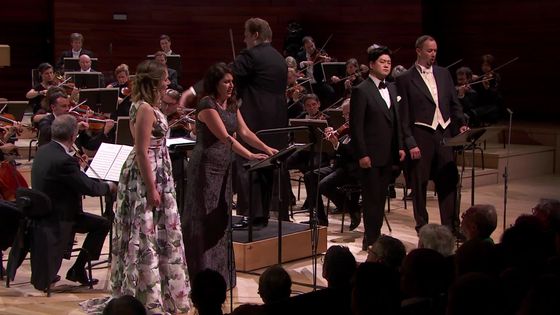