Conducted by Mikko Franck, the Orchestre Philharmonique de Radio France performs the "Violin Concerto in d minor" op.47 by Jean Sibelius with Hilary Hahn. Concert recorded live on 2 May at the Radio France Auditorium in Paris.

Four years before the death of the violinist Joseph Joachim (1831-1907), who inspired a great number of 19th-century musical compositions, Jean Sibelius began writing his own Violin Concerto, composed between his second and third symphonies. However, as contrary to Brahms for example, the concerto was not written with Joachim in mind, or even performed by the famous violinist. The concerto was first heard in 1903, then premiered in its final version on 19 October 1905 in Berlin, performed by Karl Halir and conducted by Richard Strauss. The work bears witness to Sibelius's desire to add a sense of vigour to his musical expression, a density far from the sentimentality, for example, of Glazounov (whose Violin Concerto also dates from 1903). Sibelius, himself a talented violinist, tackled one of the most traditional forms, respecting the tripartite progression (a rhapsodic first movement, a sublime cantilena, a joyful rondo), imbued with a unique and foreign inspiration. Eight years later, Nielsen also attempted to renew the concerto form (divided in two parts, each with two movements), but his attempt did not have the same impact. At the heart of Sibelius's creation we find a musical universe both changing and maturing. In 1904, Sibelius moved to Järvenpää, his final home thirty kilometers north of Helsinki, as if in search of a new environment, one of solitude and exigency.

Sibelius never sought modernity at all costs. He was of his time, and not one imposed by the day of his birth. When asked, in 1914 which composer of his time was the greatest, he answered without hesitation: "Schoenberg. But I also enjoy my own music". Little concerned by the musical fashions and current trends, Sibelius was nonetheless a victim of those, though well-intentioned, who saw him as the composer of rising Finnish nationalism.

In many ways, the music of Sibelius is disconcerting. Here is a composer who lived a long life (from 1865 to 1957) but put an end (officially) to his role as  a composer thirty years before his death; a contemporary of Nielsen, Mahler, Richard Strauss, Debussy, Paul Dukas and Albéric Magnard, he died twelve years after Bartok, and six years after Schoenberg. And yet, here is a music from the North which, though saturated with maelstroms and earthquakes, microscopic rustling and broadly open horizons, is not just a foolish imitation. Sibelius's inspiration possessed both an exhilarating and austere quality at the same time, far from the purely picturesque. Sibelius's Symphony no.4 (1911), an extreme example, was described as a "cubist" work, in turn inspiring comments of a "21st-century music" by a composer that many, however, had never dared to place alongside some of the greatest innovators of the 20th century such as Debussy, Stravinsky or Schoenberg.

Though Sibelius's personal artistic identity was clear for all to see from his very first works, the composer was no less in a perpetual search of his future. In this respect, the Violin Concerto marked a more abstract phase in the composer's output, followed by the Symphony no.3. This was also a more melancholic phase: the famous  and triumphant Finlandia (1900) was yet another nationalist work, of a more 19th-century spirit, whilst in 1903 was also born the stage music for the play Kuolema (Death)by Arvid Järnefelt, including the Valse triste. 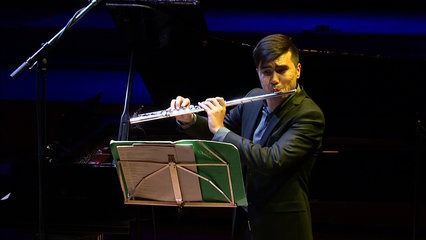 There are no folk or geographical elements to Sibelius's Violin concerto. Its role was never to evoke the glorious past of Finland, nor describe its natural beauty. What is more singular than the work's first movement, a perfect example of this concentrated energy, constantly shifting?

A ballad atmosphere, with a thematic abundance, the two solo cadenzas (the first, relatively short, arrives rather quickly; the second, more developed, arrives at the middle of the movement, which gives it a very unique structure), the role of the orchestra (which does not simply accompany the soloist), even the movement's conclusion, which continues with a renewed momentum while we are left waiting for a more abrupt end... all these elements transform this work into a succession of inventions and astonishing surprises, as if the music, adopting the most hidden of paths, was taking shape before us. The orchestra here depicts harsh landscapes in which the violin comes to meditate and sing in turn. Both have their thematic material and do not evolve according to the pleasant dialogue of the traditional concerto form.

The slow movement unravels its twenty-bar long melody with effusion, choral in nature without ever becoming sentimental, and gradually moves towards more threatening regions. Where are the "hollow cantilens" heard by Antoine Goléa? As for the finale, with great rhythmic energy, the soloist is made to dance over a hammering ostinato played by the orchestra. While still following the rondo, the work continues its virtuosic intentions. The work ends in an generous and tense atmosphere, until the stormy conclusion followed in extremis by the final luminous and peremptory phrase by the soloist. Sibelius's thoughts are known: "I believe in civilisation" - and René Leibowitz's peremptory statement: Sibelius? "The worst composer in the world"! One need listen to this concerto, one of the most beautiful of the 20th century (with that of Alban Berg) to fully understand what separates a creator from an ideologue.